Day 1 : Patient is put in a long knee brace. Drain removal on days 2 with dressing.
Exs. : Ankle exs. – move your feet up & down & round (Clockwise & anti Clockwise)
1st Week – Rest, Immobilization (with use of long brace) & Elevation.

Static Glutei
Tighten / pull in your buttocks hold for 5 sec. & relax.
Keeping pillow in between legs, press the pillow tight inside with knee straight for 5 sec. relax.


Static Quatdriaps – to continue.
Straight leg raising exs – In lying down position raise your leg keeping knee straight, hold for 5 sec. & slowly bring it down ( keeping knee straight ) [If patient cannot raise the leg by himself ask other person to hold the leg & then do the same.

While sitting at the edge of a bed / chair Hold the knee straight for 5 Sec. & then bend the knee. While straightening the knee, keep the weight of other (N) leg on the affected leg and resist or tie weight unto. ( ½ kg. to 2 kgs.)


Lying on stomach (Hamstring strengthening exs) while bending the knee keep the weight. Of other ( N) leg on affected leg & resist the bending or tie weight cuffs ( ½ to .. 2 kgs.) & do the exs.
Hams strengthening in standing – hold to the support in front & bend the affected knee (take heel towards buttocks) & then lower it. * ( Do not touch the affected foot on the ground).


Abduction against gravity – lie side ways with normal site down. Raise the affected leg upward ( keeping the knee straight.) upto 400 – 450 hold for 5 sec. & bring it down.

While knee bending in prone posin (lying on stomach) or in sitting at the edge of bed, slowly force with the other leg to achieve the desired bending.

Quadriceps Strengthening
In lying position while lifting leg straight upwards tie wt.( ½ – 2 kgs.) & do exs.
Same exs while sitting at the edge of the bed. (With tying wt.
Bicycling in the air – lie on the bed on the back, slowly bend the knee & do cycling in the air.

As per Doctor’s advise, walk without crutches. ( full wt. bearing ) Same exs to be continue with progressive increase in wts. For strengthening of Hams & Quadriceps muscles.

½ to full squats can be added, with & then with out holding the support in front.

Sitting down & getting up from the chair / stool.
Standing on toes & walking without support.
Standing with back against the wall. Place a firm pillow between knees. Slice down (600) & while sliding down squeeze the pillow as hard as you can.


Partial & full lunges – patient stand with one leg forward. Then rock the body weight forwards, allowing to bend the knee slightly & then rock backwards with knee straight. ( do not bend knee for beyond the toes).

Increase the dist between two legs (stride length).
Knee bending according. Weights can be added in the pat’s hand for progressive strengthening. The speed of the activity is also increased as control improves.

Forward, backward & lateral steps ups & downs begin with low step 2-3 inches in ht. & increase the height progressively. [ pat should keep the trunk upright step up the (low) stool by putting the affected leg 1 st & then climb down on the other side by putting the healthly leg forward.
Theraband Exs – shown in chart


Disclaimer : This is the protocol followed by Dr. Archik and every surgeon can have a different protocol. Please consult your own surgeon if you have undergone a recent surgery for ACL reconstruction.
Gallery 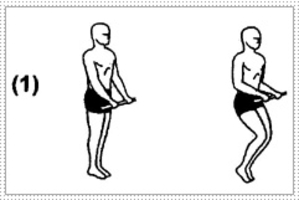 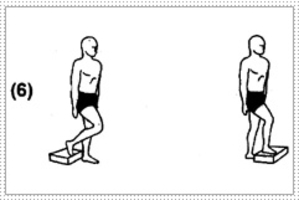