Total Knee Replacement in Classic Hemophilia – A Challenge Worth taking?

Hemophilia is a sex linked recessive disorder. It is characterized either by low level of factor VIII popularly known as hemophilia A or classic hemophilia and Hemophilia B or factor IX deficiency or Christmas disease. Factor VIII levels in normal individuals range from 0.6 to 1.5 U/ml. In hemophilia these levels are less than 0.5 U/ml. Repeated intra articular bleeding is common. This bleeding causes a classical arthropathy. The pathophysiology of hemophilic arthropathy is multifactorial. Accumulated blood inside the joint is phagocytosed by the synovium, which undergoes inflammatory changes similar to those seen in rheumatoid arthritis, the hypertrophied synovium secrets hydrolytic enzymes which destroy the cartilage. Increased intra articular pressure and repeated immobilization also play a significant par tin the destruction of the joint. Management of hemophiliac arthropathy is difficult and needs multi-specialty approach. I am presenting a complex case of one such hemophlia induced knee arthropathy.

Case Discussion
A 45 year old male sales executive presented with inability to walk for 7 months following pain and deformities of both knees. He was a known hemophiliac and surprisingly had never received a factor VIII transfusion before. On examination he had 30 degrees of fixed flexion deformity on each side with further flexion of only 20 degrees. There was synovial thickening on both sides. There was marked muscle wasting on both sides. He was unable to take even one step. He was bed ridden for 7 months. His X-rays picture showed gross porosis too.

Treatment Options
There were 3 options and these were discussed with the patient in detail.

Option 1 : Bilateral TKR, ideal option but the cost implications were very high considering the fact that he might require augments or wedges or even a LCCCK knee prosthesis and not to forget the factor VIII burden. It was also explained to the patient that the risk of infection was high in such cases.

Option 3 : One TKR and one arthrodesis: compromise between the first 2 options but financially ideal. Patient accepted this mainly on the financial grounds.

Problems, which were Anticipated
Presence of antibodies (inhibitors) to factor VIII : Inhibitors develop in approximately 15% to 20% of patients treated with factor VIII. Fortunately this patient had no antibodies since he had never received any transfusions before. A patient with inhibitor level above 20 Bethesda units responds poorly if at all to treatment with factor VIII concentrate.

HIV status : Many of these patients are HIV positive again due to transfusions. The risk on infection increases many folds if a patient id positive, however our luck continued on this front as well since the patient was HIV negative. In HIV positive patients a preop CD 4 count is a must and the incidence of postoperative infection is low in patients with counts > 400 x 10  .

The requirement of factor VIII are as follows for a TKR


Day of Surgery
Factor VIII levels were sent at 8 AM. Result received at 1pm that the levels were 100%. Patient taken up for surgery at 2PM. General anaesthesia was used. Right TKR done first under tourniquet and the intraoperative pictures are shown below. Bone was very soft but luck favored us again and we could implant a standard cruciate sacrificing TKR. It took us 90 minutes to complete the surgery i.e. 20 minutes more than a standard TKR. We then arthrodesed his right knee using 2 A-O 4.5mm LCDCP plates at 90 degrees to each other. This surgery took us 70 minutes. Since suture removal would be hazardous we took subcuticular ethilon sutures on both sides. Drains were inserted on both sides.

Postoperative Protocol
We did not opt for a routine physiotherapy protocol as the factor requirement would go up and we were on a shoestring budget! Wounds healed well without ant infection or breakdown. However he developed a large blister underneath the tourniquet on right side and required factor for more time than usual. His blister did heal with repeated dressings and did not require any debridement. He walked with the help of a walker and his replaced knee at the end of 16 days and was very happy. He achieved a range of 0 to 84 degrees of flexion, which was excellent because the average flexion reported in various series world over has been 74 degrees.

Conclusions
Replacement surgeries or for that matter any surgery in hemophiliacs is a huge ask but if the required facilities are available then the outcome is very pleasing. These surgeries are to be done only in centers where there is a good hematology backup and excellent theatre facilities for performing joint replacement surgeries. Careful follow up of these patients is mandatory and infections even in remote places should be treated aggressively. Routine prophylaxis for dental work is recommended. 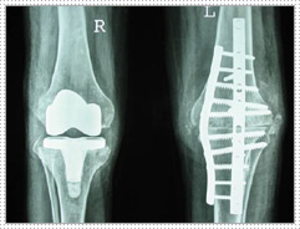 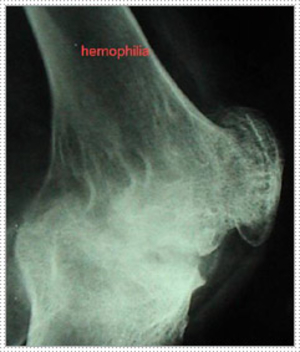 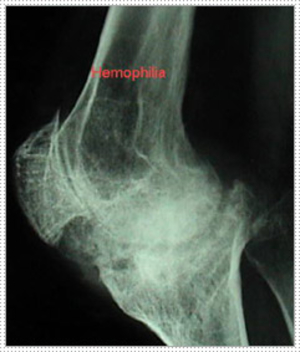 Total Knee Replacement in a Case of Haemophilia - Dr Shreedhar Archik
Did you find this topic helpful?  Yes   No
View All Topics
×
prev next
prev next
?
Ask Question
AboutMyClinic
SmartSite created on AboutMyClinic.com