Technology is changing our lives everyday. The mobile phones are getting smaller and smaller in size and apart from functioning like a phone they do a lot many things. Total knee replacement surgery also is being governed by the recent advances in the technology. You must already be aware that computers now help surgeons during the surgery to get a zero error surgery. The new thing on the block is now MITKR or mini incision total knee replacement surgery. Surgeons always tried to get the joint replaced by utilizing smaller incision, however a small incision many times meant a surgery where the view was limited. A limited view meant more chance of error and the results were universally bad. Computers changes all this. Now I can perform a surgery through a very tiny incision but not compromise on the accuracy. Why is the small incision important? A smaller incision means less cutting of the tissues and that translates into early healing and rapid recovery.

It is a well known fact that men and women are different.

Orthopedic surgeons world over have reported anatomical differences in women’s and men’s knees for years.

Orthopedic surgeons often have to consider intra-operative adjustments during knee surgery to accommodate women’s anatomical differences. At the same time it is worth noting that Women account for nearly two-thirds of knee arthroplasties performed annually in India. Also Women are three times more likely than men to forego knee arthroplasty. This brings us to the next development in the knee replacement surgery and that is “Gender Specific Knee”. I can now use a knee specifically designed for bones in a female! I have a similar male model available! In a nutshell it means “Historically we have shaped the patients to fit the implants. Now we have implants shaped to fit the patients.” The company to develop this unique concept is a company called “Zimmer”. Here is how a gender specific knee looks.

A traditional implant overhangs female bone as shown in red.

Zimmer Gender Solutions High-Flex implant on female bone shows little to no overhang as shown in the lower model.

I also need to cut a lot of bone during the preparation of the thigh bone and in Indian population the bones sometimes are too thin and fragile. In such situations the remaining bone may be of inferior quality and may lead to intra operative fractures. I now have a different knee for such patients where the bone cut is much smaller.

All in all I can tackle any situation because of advances in technology.
To Know more contact Dr Shreedhar Archik
Gallery 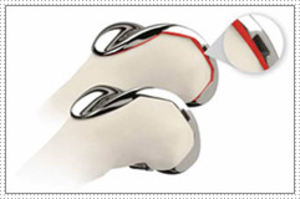